Bryan Lewis Saunders is an American artist who  specialises in self-portraits and during his career he has created over ten thousand of them. He is perhaps most known for his ‘Under The Influence’ experiment in which he took a different drug every day and documented it through his art, resulting in some strangely wonderful images. 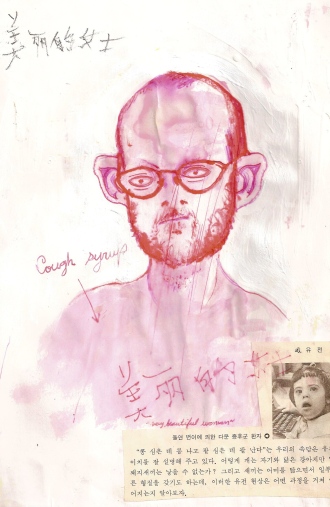 I was lucky enough to talk to Bryan about his rejection of style, his anxiety and the importance of being outrageous in a series of questions:

Did you ever think that  (Under The Influence) would be derided by the art community?

The art community does not care because I am not part of them.

How are you NOT part of the art community?

I do self-portraits daily and that project is not about each individual image,  it is about the process or all of them together as a tool for the transformation of my self. That is the real work of art. My self. That can never be part of an art world I don’t think.

And because I have no “style”, I use every style, it is my rejection of style, because style is fashion and brand and marketing. So, to deny a “style” of my own is one of my ways of denying current ideas of what people think art is in our society. My style is “mutation” and no one can own that.  That can’t be diluted or consumed.

Many of my pictures are ugly, or gross, or disgusting or trashy; it undermines taste. If I use colours that are baby shit or night club parking lot late night vomit puddle colours it goes against all people’s biological ability to enjoy looking at it.  Rejecting materialism and blatant commercialism is what I hope to be doing. I want to restore drawing to bring it back to its original basic primeval human instinct. This is contrary to the current art community.

Don’t you think that ‘rejection of style’ is a style in itself?

Being able to use lots of art styles is like increasing your vocabulary if you’re a writer. But I don’t like to just copy styles for style’s sake. It takes the truth out of it and turns that act into a kind of caricature. I must feel it to some extent, I must be empathetic or in some way very close to that way of seeing in order to use it. I don’t reject all styles, I embrace them, but, I totally reject the purpose of having only one of them. 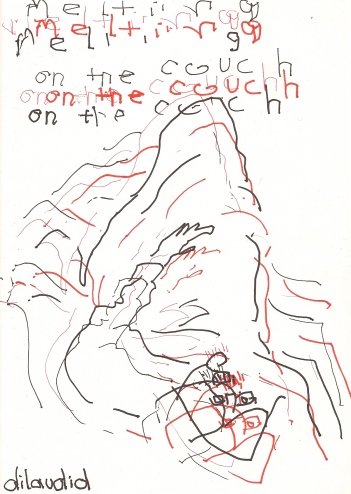 What are your bad influences?

Politics and almost everything in my peripheral vision because my brain sees those things,but, not consciously. It can be frustrating. But that is also a reflection of my life, so, I’m not sure if that can be bad. Not sure if I have any bad influences, maybe I think influences can’t be bad. Is there even such a thing? There are definitely artists that I don’t ever want to be like, they probably influence me too in a negative way. Not sure.

How can people better understand their influences?

One has to pay attention to their surroundings and experiences and spend time reflecting on their environment which really seems like an impossible challenge to me at this point… energy, ungodly amounts of money and resources and effort are being used to constantly distract people and keep people from doing just that. If you can learn about how your brain really works that is a terrific place to start.
The problem is that just being aware of them does not prevent them from happening. You still have to stay on your toes and will still make errors in thinking. People will still suffer from cognitive biases and make decisions for the wrong reasons or reasons unknown to them. That is another one of the huge problems we face.

Would you class yourself as a modern day Frida Khalo?

No way! I am no where near as talented as her! I don’t have the skills or the same focus of vision to even be mentioned in the same sentence as her really. But we also don’t do the same thing either. You can’t really compare us. Daily self-portraiture is a whole different thing than painting yourself, it’s not even apples and oranges, it’s like apples and air-planes or something. 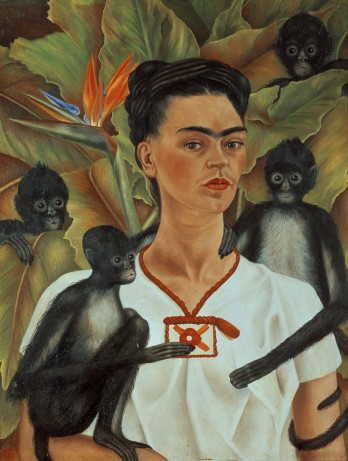 How does your personality limit you?

Well, I’m more of a high anxiety, obsessive compulsive, schizophrenic type of person so I’m not able to often do self-portraits were I’m just floating in the soft clouds or relaxing in a meadow. I’m more of a city person so I don’t have as many experiences with nature as I would like. Some of my nature pictures are my most favourite ones because I was so out of my element.  I’m trying to use art to expand my life as well as my consciousness. 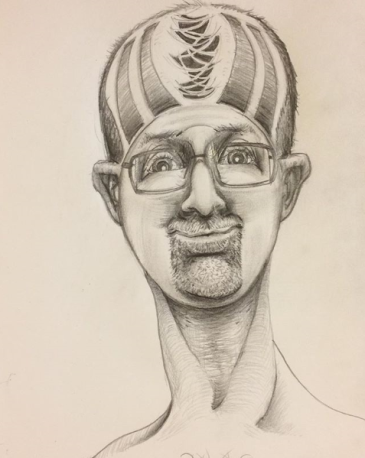 Are you trying to be outrageous?

I would do a lot of things for art, definitely! I don’t say things that I don’t believe in. I really do nothing consciously for a persona. Or maintaining one. I would say I even try not to have a persona sometimes because the one I was born and raised with was deeply disturbed. I want to one day do away with the notion of self, that is true. Oh, except for maybe being a positive influence to young people. That part of me I feel is really  important so I try really  hard to answer everybody who writes me about their art class and their term papers or research. That’s way more important to me than spending time and energy trying to one day have a career in art or get attention. I would much rather pay attention than get attention.

Too much candy too much gel pens I’m dead 😵

Would you like to be part of something bigger or have you already got a support base?

I do feel that I’m a part of something much bigger. In some ways, artists are like shamans and communicate with their ancestors. I really believe that. When I make a daily self-portrait I often times see my ancestors  and I can respond and interact with them in forming certain empathies and through the continued manipulation of my thoughts and actions and feelings, communicate back. In that respect I do not feel alone at all. Now when I go to NY or somewhere and see great big exhibitions of giant neon colours sloppily painted on trash selling for a lot of money I can’t help but feel very alone in that moment.

Does seeing that kind of work make you angry?

If it does make me mad I can’t stay mad for long because it’s just a reflection of how fashion and taste have been degraded over the years and also I think it’s a reflection of the dumbing down of the populace in the States too. The degradation of craftsmanship and skill play into it as well. And I’m speaking very generally, stereotyping, because there are plenty of painters who have impeccable craftsmanship but they don’t seem to be the ones driving taste at the moment. I would say that much of the art in the “art world” deserves the attention it gets because that attention is what drives it, that attention is what it thrives on, attention is its life’s blood along with name recognition and celebrity. That is what makes it fashion and not art in my opinion, but who am I to say what is and isn’t art? That is what each individual must decide, it’s a personal thing.

Take a look at VICE’s interview with Bryan here